Not your ordinary chinchilla cage. Our Chinchilla Mansion is made with a chinchillas needs in mind. Wooden shelves, no plastic, and 100% safe for your animal.

It offers a full opening top with a 12" x 14" door on the upper part of the cage, and a large 12" x 18" door below. Both doors are secured with safety-trimmed metal door guards.

The bottom of the cage is equipped with a 1-1/2" tall powder-coated slide-out tray. The floor panel below the tray is made of 1/2" x 1/2" wire. When the tray is removed for cleaning our sheet metal flap keeps your chinchilla from escaping.

With the Deluxe Bundle, everything you need is included.

In addition to the four solid pine shelves, you will also receive the following:

Thank you so much my chins love their new cage !!! Great quality. 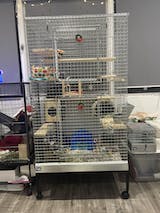 Worth the money because it's better than anything you'd find at a big box store. The chins love all the extra space! It's apparent that the crafters put a lot of thought into every detail.

First off like many other reviews it did not come at the expected so keep that in mind it will take a while to get the cage. Though all of my emails were answered, they were friendly and professional, and in the end I did get everything. The cage does look good and our chinchillas Cosette and Eponine do absolutely love it. So give yourself time to receive the cage because it is worth it.

Couldn't be more perfect for my fluff ball. He has been hopping around, running in the wheel, and popping in and out of his hut. Definitely worth the extended wait, great quality. I'm super impressed and satisfied!

Although the wait time was much longer than we anticipated, we received the cage and quality is in the name for the right reason! It is a great design and we plan to order 2 more for our other chinchillas. Hopeully the wait time is greatly reduced now and when we get the other 2 cages, all of our chinchillas will be happy!

I purchased this cage in January with the full knowledge that it would be several months (not the 30-45 day estimate given on the product page). As expected, the cage did not ship until April and I received a package on April 12. There was NO information via email or included in the box that indicated that a second package would be coming, so I was quite confused when I received only the cage and shelves, and none of the "deluxe" accessories. The bottom tray of the cage was also bent in shipping so badly that it is difficult to slide in and out. I emailed the company about the 2 issues, and 3 weeks later have yet to receive a response. Then, out of the blue a second box with the rest of our accessories appeared last week (nearly 5 months after the initial order). The box was missing the wheels for the stand. I have emailed the company AGAIN, but given my experience thus far I am not holding my breath. As for the cage, I like it very much but for the price these issues and the lack of any discernible customer service are unacceptable.

UPDATE: After leaving the above review, I was immediately contacted by Joshua Paulson. The replacement tray and wheels were then shipped and received in good working order. I think this cage is better than anything out there, just beware of the time table and difficulties in communication.

so far so good

only problem i had was i assumed for the price being charged that the cage was shipped already assembled and the accessories would come in a separate pkg. but the cage does require the customer to assemble it and then place the accessorues inside it after

This is an update of my order on 6 Jan. The cage and ledges were delivered to me on 9 April. The rest of the order, mainly the stand and various accessories, were delivered on 5 May. The quality and design of the accessories continue to amaze me. Unfortunately, the stand comes without the wheels and the food dish has been missed out. I am still waiting for acknowledgement and update. Hope to receive them soon.

This cage was an excellent cage with fine craftsmanship! Even the packing of the cage had a lot of thought put into it. It took a long time to get it but each time I sent an email about it, there was always a response. The mail carrier damaged the tray and I’m not sure how they could even manage to do this! It is very thick and sturdy, but there was an immediate response to my email about the damage and another was sent out quickly! Great service and great product!!

I have two of these cages now. Love them so easy to clean. You option to place the ledges where you want and if you want to use them all or not.